The aim of the WTO Trade Dialogues on Food is to create a conversation around the role of international trade in food security. The Trade Dialogues on Food invite experts from governments, non-governmental organisations, businesses, academia, think tanks and foundations, to debate the most topical issues in food trade. Each year the international trading system moves enough wheat, maize, rice and soybean to feed approximately three billion people around the globe.  Meanwhile, 190 million tons of fertiliser applied to farmland annually play a key role in helping us grow enough food to sustain our expanding population, with much of it traded on the international stage.  Climate change will make international trade even more central to food security, acting as a vital conduit for food from food-surplus to food-deficit nations in the wake of natural calamities. This episode of the Trade Dialogues on Food will be dedicated to “Enabling Agricultural Trade,” and will also run as a United Nations Food Systems Summit Independent Dialogue.

THE EVENT WILL BE LIVE-STREAMED ON THE WTO YOUTUBE CHANNEL AND CAN BE WATCHED HERE https://youtu.be/OZF9j19Cd60.​

THERE IS NO REGISTRATION REQUIRED. 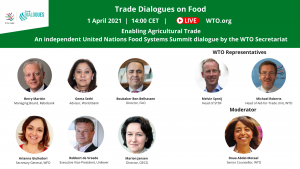